Chickens. For centuries we have oppressed them, grilling, roasting, stewing, and stuffing them in buns. We should have known the time would come for us to pay. And it did. Intergalactic chickens invaded Earth, seeking revenge for the oppression of their earthly brethren. They came out of nowhere, and everywhere.

It was only you who managed to repel the invasion, and saved humanity from an eternity of servitude. Then, things got serious. The intergalactic chickens assaulted the solar system and tried make sure that every planet was inhabited exclusively by chickens. Yet again, it was you who took the world's fate in your ketchup-stained hands and saved the day.

But it isn't over yet. Once more, it's time to don your teflon-coated, egg-repulsing helmet and fight for our ancestral right to omelettes. Only you can make a difference. Will you succeed? Will the future of chicken burgers be secure? Or will you end up as part of the menu in a galactic chicken restaurant? 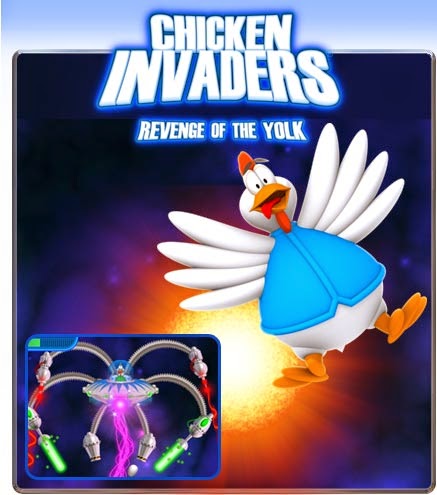